In five hundred twenty-five thousand six hundred minutes, how do you measure a year in the life… How about love?

These powerful lyrics from the song “Seasons of Love” were written by Jonathan Larson for his Tony award winning musical, Rent. Because four of the lead characters in Rent have HIV/AIDS, “Seasons of Love”, performed by the entire cast, has been associated with World AIDS Day on December 1st. Through this song, the characters suggest that the best way to measure the value of a year in human life is by measuring how much love has been captured in that year. I could not agree more.

Sadly, many individuals living with HIV/AIDS face a great deal of stigma and lack the support system that they need in the face of such a life altering syndrome. While HIV/AIDS, if properly managed with medications, may not cause physical consequences as dire as it once had (at least in countries where treatment is available), the social and emotional consequences are still very much real. I can only imagine how isolated and frustrated an afflicted indivdual might feel, not just from fear of the unknown but also from being surrounded by so much ignorance and discrimination. If a year in human life were to be measured in how much love it sees, then the value of each year for these individuals wouldn’t be very much at all, would it?

The Student Section of the Maryland Public Health Association (SMdPHA) has recognized that the HIV/AIDS epidemic and the concomitant social stigma are huge problems. So every year, the student organization’s HIV committee works hard to plan and execute a series of events, throughout the month of November, aimed to promote awareness about HIV and break down the stigma. We kicked off the month with a general body meeting featuring representatives from the JACQUES Initiative. A program within the University of Maryland School of Medicine’s Institute of Human Virology, the JACQUES Initiative provides many services to the Baltimore community. These include HIV testing, linkage to care, and treatment support.

Other events that have already happened this month include:

Look forward to other exciting, upcoming events for HIV/AIDS month:

For more information about these events, feel free to contact me by commenting below or reaching out via email (quynh-nhu.nguyen@umaryland.edu)! 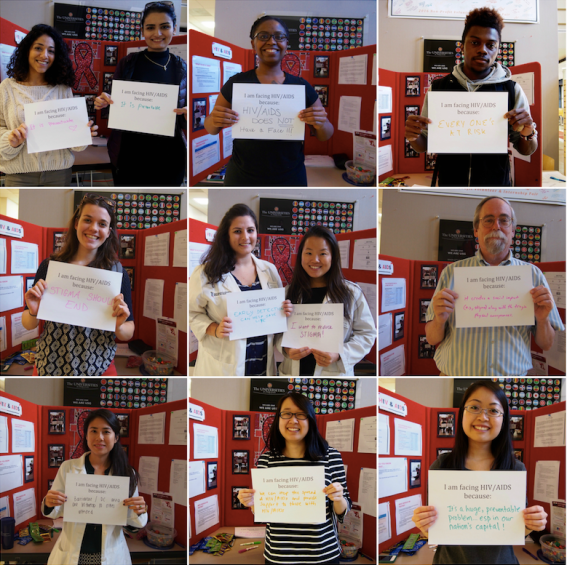 Students and staff at USG participating in the Facing AIDS campaign.

This entry was posted in Uncategorized. Bookmark the permalink.