Something Unexpected I gained from USG

For example, students come to USG for a degree because of the easy access to campus, smaller class sizes, flexible schedules, and many other personal reasons. Most USG students have very busy lives outside of school so their education at USG can be described as “in and out”.

I first attended the Public Health Science program at Shady Grove because College Park didn’t have that major at the time. I planned to be “in and out” in 2 years too. I did graduate within 2 years. My initial goal really was to just focus on school and not get involved in campus because I have a bad habit of getting distracted. That didn’t go according to plan. I joined 2 very memorable clubs that I later became officers of: Student Leadership Association (SLA) and Students Engaged in Public Health (SEIPH). I met many colleagues and friends through the clubs and through my classes or work for the Public Health Science program.

Little did I know that this “Life at USG” will follow to my “Life after USG”. I assumed I’ll move onto a different stage in my life after I graduate. I did move on. I’m in Grad School now, but still at UMD. I am fortunate enough to have my contract as a Graduate Assistant renewed so I will still be working at USG. Most of all, the friends I thought I met because of the clubs I joined or the classes I attended…they’re still in my life!

Friends are definitely an integral part of my life. I’m an only child, so friends are the closest things I have to siblings. I’ve known that, but I never realized how important and amazing it is to have friends who were part of my life at USG as an undergrad. There were so many ups and downs that only they could relate. Being in the same major definitely helps too. Even after our graduation and even though we have dissimilar interests in Public Health, we still understand each other  and support in our journey to whatever’s next after “Life at USG”. We’re such a diverse group that I don’t think we would ever be friends in High School, but by fate, we met at USG. Now, they are such a big part of my life that I don’t know what I’d do without them. I do know that they will always be there for me, and I would do the same for them.

Thank you, USG, for bringing me some of the best friends a girl could ever ask for.

I want to give a big shout out to Cynthia, Wanda, Nicole, and Sara. ❤ 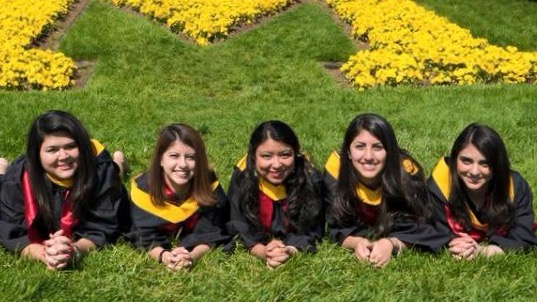 Peace Corps Volunteer in the Kingdom of Wonder (2017-2019)
View all posts by Christine →
This entry was posted in Campus Activities, Life at USG, Uncategorized. Bookmark the permalink.