As Shady Grove Liaison for my school’s chapter of the College of Psychiatric and Neurologic Pharmacists (CPNP), I am collaborating  with USG’s Center for Counseling and Consultation (CCC) and the Culture of Care Network (CCN) to organize a four day event on suicide prevention, a topic that is near and dear to my heart.

On Monday 4/30 through Wednesday 5/1 from 1-2 PM, pharmacy and nursing student volunteers will be tabling in Building III to educate the USG community on suicide facts and figures, warning signs, ways to ask someone who may be contemplating suicide, what to do when you know someone who plans to commit suicide, and helpful resources. If you answered true to all of the statements at the beginning of this post, you are already quite knowledgeable about suicide.

Then, on Thursday 5/3 at 1PM, we will be having a short Suicide Prevention Awareness Walk that goes around the Courtyard and ends at the Garden of Unity and Peace. Participants will all receive a “Be the Voice” T-shirt, and a ribbon to tie around the Arch as a visual statement of the extent to which suicide affects our community and how we can all take an action, no matter how small, to help prevent suicide.

The Garden, funded by a grant awarded to CCC by the Maryland Suicide Prevention and Early Intervention Network (MD-SPIN), will at this time be officially dedicated as a place for reflection, expression, education, and community. There will be several speakers at the Dedication, including the USG Executive Director, Dr. Stewart Edelstein.

My hope is that this event will help to close some gaps in knowledge about suicide and promote a commitment among the USG community to prevent suicide. If you’re interested in helping with either tabling or the Walk/Dedication, please sign-up here and see the flyer for more details. Feel free to reach out to me with any questions – I look forward to seeing many of you there! 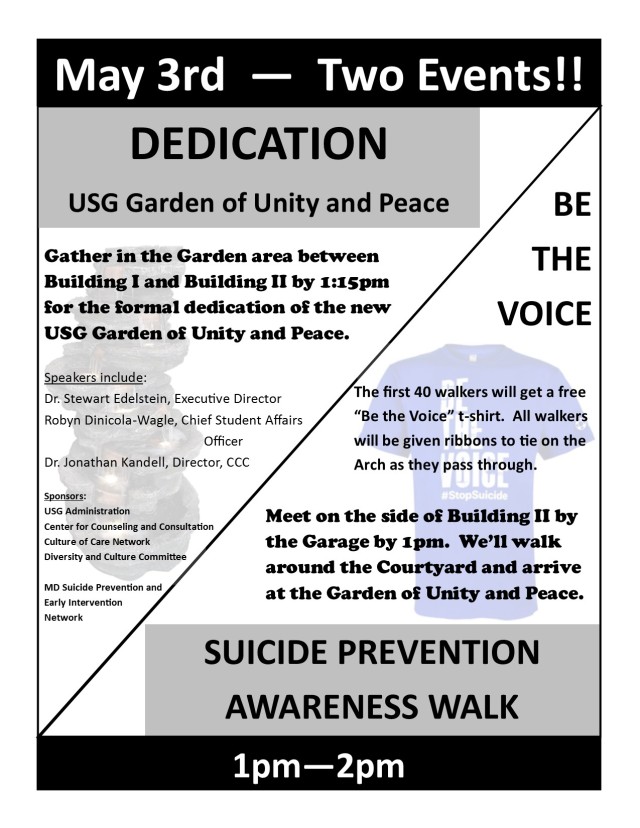 This entry was posted in Campus Activities, Faculty & Staff, Life at USG. Bookmark the permalink.