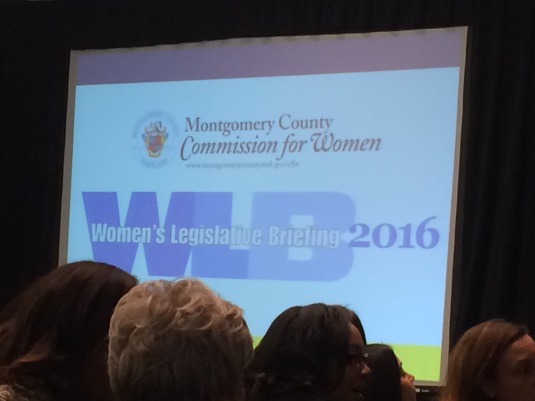 The annual Women’s Legislative Briefing, presented by the Montgomery County Commission for Women.

Politics. This is a subject that i’ve  long found boring, and uninteresting. I guess it’s because when it comes to politics you’re either in or your out, meaning you either have a say or you don’t. It wasn’t until I attended the Women’s Legislative Briefing that my stereotypes about politics were finally broken.

The WLB is Maryland’s longest-standing women’s legislative event for women. The event is planned by the Montgomery County Commission for Women and is hosted right here at the USG campus.

The purpose of the briefing is to  “bring together advocates, policy makers, and emerging leaders to empower, engage, and mobilize Marylanders around issues affecting women and girls throughout the state.” (WLB Official Website)

The event began with an opening ceremony in the Multipurpose Room. This is where notable members of the house of representatives and senators gave speeches and engaged in discussion about issues facing women like unequal pay, maternity leave and infant care, violence against women and more.

I sat in the 4th row from the stage, just a few feet away from members of the House.

The WLB Opening Ceremony, an empowering event for women and girls of all ages.

Following the ceremony you could choose what group discussion you would like to join. Each discussion was geared towards one specific issue facing women today.I chose to join the Health & Safety for Women: Domestic Violence, Sexual Assault and Trafficking discussion. This group was mitigated by Senator Lee and led by a panel including members from the  Maryland Network Against Domestic Violence, Maryland Sexual Assault Coalition, and more.

At the end of the very educational and informative speeches given by these leaders it was time for an audience Q&A panel. Being passionate about the safety for women I wasn’t hesitant to approach the podium to ask my question to the panel. Later I watched a documentary on human trafficking and engaged in a group discussion about the film.

So what did I learn about politics?

I learned that politics is not necessarily always a publicity stunt or popularity contest. Real politics is about the people, I mean after all we are a democracy right?

If you want change, if you want to make a difference when it comes to policy or laws or even just in your local community you can. You have a say, and you don’t have to be a leading government official or lawmaker to foster change.

I'm a self-starting storyteller with a passion for social advocacy and personal development. My goal is to engage and connect my readers through healthy discussion and sharing of ideas on various topics.
View all posts by Layla.Katharina →
This entry was posted in Campus Activities and tagged Commission for Women, Maryland, Montgomery County, WLB, Women's Rights. Bookmark the permalink.