Happy Mardi Gras, everyone! I jetted off to New Orleans the first weekend after classes started to celebrate Fat Tuesday (see the picture of traditional “King Cake” below). My good friend’s cousin was marching in a parade, which wound its way through the French Quarter. So, I headed south to watch the parade, explore the Crescent City, and try my hardest to eat every oyster in the Gulf of Mexico. 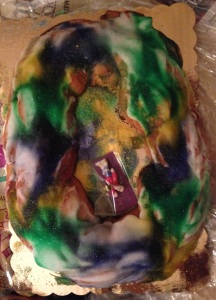 Taken shortly before this King Cake met its match…

If there’s one thing that weekend of travel afforded me, it was the opportunity to practice my nursing poker face as I wandered the streets of New Orleans during the first weekend of the notoriously debaucherous Mardi Gras season. Now, the “poker face” isn’t limited to the field of nursing. It’s a necessary skill of, well, poker players among other people. And I would go so far as to say almost every profession has some instances where it’s best to maintain a neutral facial expression. (For those of you who haven’t ever heard of it, our friends at dictionary.com define poker face as “a face without expression, as that of a poker player attempting to conceal the value of his cards.”) In my short time as student nurse, I’ve found that while there are many opportunities to connect with patients with a laugh or a sympathetic ear, most of the time I’m working to listen patiently and maintain neutrality.

I was reflecting on a recent simulation we had here at school; our “patient” was decidedly complicated – both physically and psychosocially. Encountering such a patient (even if simulated) just a year and a half ago would have sent me retreating into the hallway with a  face displaying emotions ranging from wild self-doubt to embarrassment. I’m sure my fellow students and I will face our fair share of frightening scenarios, unpleasant odors, unexpected procedures, and emergent situations as we enter into practice. But I’m hopeful we’ll all react with grace, skill, speed, and, a poker face. I think we’re well on our way.

This entry was posted in Life at USG. Bookmark the permalink.