Are You Man Enough? 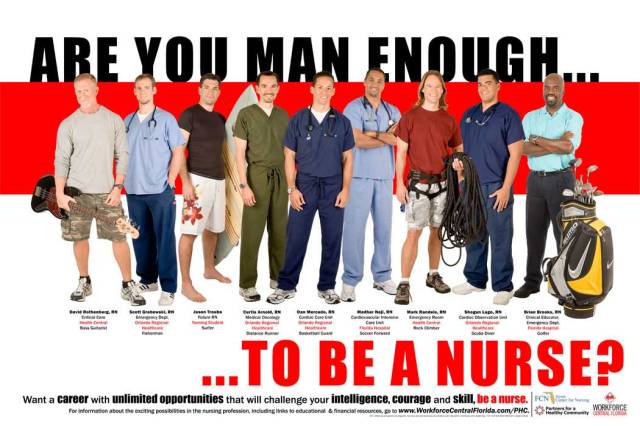 A cool poster produced by The Oregon Center for Nursing who supports informed, well-prepared, diverse and exceptional nursing professionals.

If you think of a woman when you hear the word “nurse”, you’re not alone. It is true that nursing has been a predominantly female profession since way back in the days of Florence Nightingale. (True or False: Louisa Parsons, the founder of the University of Maryland School of Nursing, was a student of Florence Nightingale’s. That would be a resounding “True”.)

In 2017, 13.6% of the BSN students at the University of Maryland are men. The 2011 U.S. Census reported that 9.6% of working registered nurses are men compared with only 2.9% in 1970. Is it just more accepted now or are these just super smart dudes who realize this is an amazing profession? Well, if you go by the men at USG in the school of nursing, the latter would be true.

Thanks to these classmates for agreeing to share some thoughts on their choice of nursing.

I consider myself very fortunate to be able to attend USG with these smart and driven men. Thanks again for sharing your stories.

Image | This entry was posted in Academics, Life at USG, Uncategorized and tagged BSN, Challenging, Men in Nursing, Nursing, University of Maryland School of Nursing. Bookmark the permalink.

1 Response to Are You Man Enough?