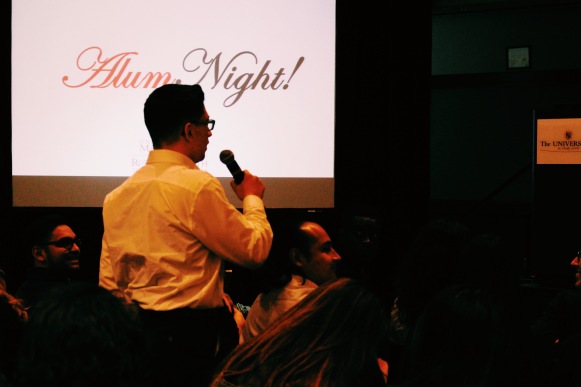 Welcome back from the short break everyone!

I hope everyone had a lovely Thanksgiving. As tempted as I am to talk about the delicious food I consumed during the break, I do want to rewind it back a couple weeks and talk about the “Alumnight” event that was hosted by the Undergraduate Programming Committee (UPC) on November 16th. Alumni of the Smith business school were in attendance to network with current undergraduate students, with several agreeing to be a part of a panel where they welcomed questions from the audience and discussed more about their transition to the professional world.

While the entire event was both informative and enjoyable, there was one part that was particularly memorable. During the panel, one student asked the alumni what they wish they had done differently when they were still a part of the Smith school. One of the alumni then responded with a statement none of us expected:

“I wish I had spent less time studying.”

Immediately after he spoke those words, there were a few chuckles and a lot of gasps. I tried to peer over to the other side of the room to see Dean Mullin’s expression. Certainly, this would not be the kind of response he expected, nor wanted his current students to hear. However, the individual immediately said he wanted to clarify what he meant. He commended the communication skills of the other panelists while noting that his own were not necessarily up to par. He spoke about how all throughout school, he was focused on his books and translating the knowledge he acquired to grades on a transcript. He elaborated on about how now that he’s in a professional environment, he realizes the importance of “people skills” and how far his colleagues are able to progress as a result of developing those early on.

That truly resonated with me at the time, and stuck with me as Thanksgiving break was approaching. Rebecca, another blogger, stated in a previous post that “Oftentimes Thanksgiving break can turn into a chance to catch up on homework instead of an opportunity to reflect on life, practice gratitude, and spend time with family.” However, during this break, while I allocated a certain amount of time for work, I made it a goal to put away the stress of school for those few days to truly enjoy the company of my family and friends around me.

Although Thanksgiving break has come to an end, I believe the message of our fellow alumnus is something we can still carry forward. As we continuously seek academic successes, let us not overlook the opportunities to foster meaningful relationships and develop these interpersonal skills that will be valuable in the long run.